Is the US in a recession? George Bush does not think so. 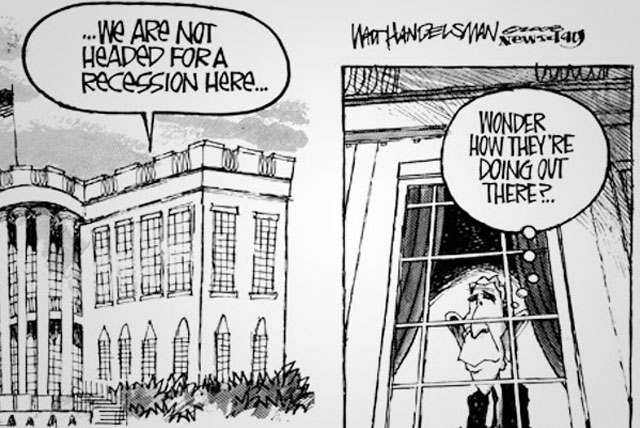 Earlier this month the President of United States, George Bush, declared that the US was not in a recession but simply a slowdown; shortly after past-Federal Reserve Chairman Alan Greenspan predicted there was a 50% chance of US recession, and just this week the sage of Omaha, Warren Buffet declared that the US was already in a recession.  Below we ponder who is right and does it actually matter.

First we must establish how we define a recession.  The commonly subscribed to macroeconomic theory defines a recession as being generally associated with a “decline in a country’s real gross domestic product (GDP), or a negative real economic growth, for two or more successive quarters of a year”.  So ‘technically’ Bush was correct, GDP growth has definitely slowed in the US, down to X% in the first quarter, but not fallen into negative territory; yet.   So when Buffet announced in German last week “I believe that we are already in recession” upon what did he base his opinion?

A more pragmatic definition of recession is “a significant decline in economic activity spread across the economy, lasting more than a few months, normally visible in real GDP, real income, employment, industrial production, and wholesale retail sales.  A recession begins just after the economy reaches a peak of activity and ends as the economy reaches its trough”.   Looking away from pure GDP growth figures MR. Buffets assertion starts to carry more weight.

The principal pillar supporting US economic growth, consumer spending (representing around two thirds of US economic growth) is weaning.    The May Conference Board’s consumer confidence index fell to its lowest level in sixteen years as high oil prices, soaring food prices, a worsening labour market and falling home prices made consumers nervous about the future.  A nervous consumer is a cautious consumer and forecast that consumption will fall by 2.5% (the worst decline since 1959) look possible.

US New home sales are down 44% from a year earlier in April, existing home sales where down 18% year on year, and average price of a previously owned home was down 8%.   Indeed the recent S&P/Case-Shiller US house price index showed that house prices where falling almost five times as quickly as in the last US recession in 1991.   Equally interesting is the fact that mortgage applications fell 7.8% against a backdrop of more stringent lending criteria imposed after the recent sub-prime crisis.

It would seem that depending upon how one defines a “recession” ultimately decides whether the US is near, or even in, a recession.  Whatever conclusion we each arrive at one thing is clear; consumers in the US, and around he globe are suffering, the cost of living is increasing while incomes are stagnating or in some cases falling.  This certainly can not be conducive to economic growth.   Will a US recession affect UK and European based investors?  Unfortunately yes.  The much debated “disconnect” between global finical markets has proven ineffectual in stemming economic woe from spreading across the Atlantic.  If the UK is indeed trailing the US by six-months we can get clues to the extent of any slowdown from the statistics highlighted above which do not paint a pretty picture.   One major difference of course is the reluctantly shown by the BoE to cut interest rates.  If the US does, as Mr Bush, suggests avert recession through fiscal stimulus policies, will the UK be so fortunate, or will the Banks inflation fighting crusade push the UK into recession?  This is a question yet to be answered.

Is the US in a recession? George Bush does not think so.
PREV ARTICLE
UK Inflation
NEXT ARTICLE
Who is afraid of a Bear Market?