Ever seen a Trojan horse made of US Dollars? 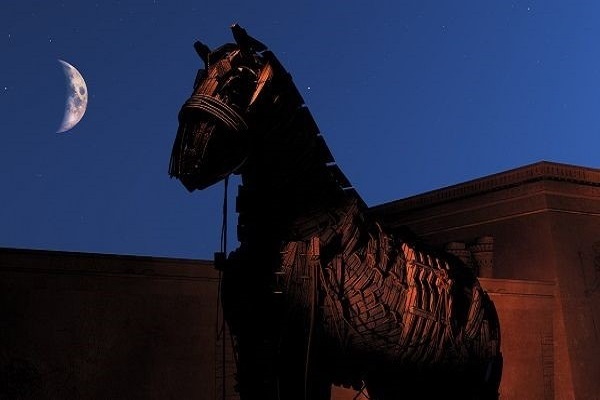 Perhaps you, like me, have been watching these markets rallying back to within range of their previous highs at astonishing pace. So much so that this rebound has been coined the most hated rebound in history. Why? Well, it’s caught most investors off-guard who are underweight equities, there also remain a huge amount of investors short of the market (investors who bet on the market falling) and finally, there are record levels of cash sitting on the side-lines not being invested.

So where do you sit? Are you cheering them higher or, as I am, watching through parted fingers as you would do a horror movie? First estimates of US GDP for Q1 came in worse than many had hoped at -4.8%, given that January and half of February were business as usual it paints some picture of what happened in March to turn an entire quarter’s GDP negative. This is even more astounding when one considers Q4 GDP in the US was 3.5%. That’s an 8.3% decline over a quarter for which a few weeks were to blame. How did the S&P500 react to the news? Well, apparently a -4.8% decline was good news so it bounced half a percent - hence watching through parted fingers.

Don’t get me wrong, a 30%+ rally back is a welcome start to repairing some of the damage capital markets inflicted on investors’ portfolios and for that I am extremely happy. However, every percentage point higher these markets go, a phrase keeps popping into my head, “Timeo Danaos et dona ferentes”  - it's Latin for, “I fear of the Greeks even when they bring gifts”.

The phrase hails from the famed story of the Trojan horse. The Greeks having left the beaches of Troy defeated, gifted a giant house to the Trojans as a victory gift. Unbeknownst to the Trojans who dragged the horse inside the city of Troy, the equestrian gift housed a group of warriors lying in wait. The warriors got out of the horse and eventually sacked Troy from within.

The rally was initially dismissed as nothing more than a bear market bounce which has now eclipsed all expectations and wrong footed economists the world over. As glorious as it is on face value, could it herald something more sinister in the shape of a multi trillion dollar fiscal Trojan horse?

With 22 million currently filing for unemployment and counting, entire industries are on their knees with large corporates sounding the bankruptcy alarm and untold amounts of small businesses who don’t qualify for a loan simply slipping into the abyss. It’s unsurprising that this rally’s legitimacy has created some very polarised opinions.

Why is it rallying then? Well, it would appear investors have kept buying into stocks under an assumption that, in the case of the US market, the Federal Reserve (FED) will keep pumping money into the markets via buying more and more assets and won’t ever stop.

The FED initially dropped rates to 0% and committed to buying $500 billion in US government debt and $200 billion in mortgage bonds. They then decided this would actually be limitless bond buying and would start buying corporate debt, associated ETFs and high yield bonds. To date this amounts to around $2.3 trillion.

Versus 2008, that level of support constitutes the FED throwing not just the kitchen sink but the bathroom sink, the spare bathroom sink and even the small sink from the toilet in the hallway. No surprise then, that investors have felt pretty immune from getting an investment call wrong when the central bank is there to rescue you. What worries me, is that the FED seems to be weighing up its options in relation to buying equities and going into negative interest rates. All of this when it’s stacked up, begins to look something akin to a Trojan horse of hope based on stimulus rather than economic reality, which could bring the market down from within.

Buying your own equity market is perhaps OK in Japan or some other secondary economy but doing it in the US market which has been, and will continue to be the lynch pin of global markets, I think could prove a volatile experiment for everyone.

Ever heard the phrase, “When America sneezes the rest of the world gets a cold”? Well, it’s true.

The problem in the short-term is central bank support is fuelling investors to brazenly buy stocks despite the knowledge that economies are going to be littered with failed businesses when the lockdown is lifted. This is why it’s akin to a Trojan horse, investors are focussing on the enormity of the support and perhaps neglecting some of the alarm bells sounding around why the stimulus is in place.

To ignore the risks in a chosen activity because you believe you are immune from the consequences of getting it wrong is called “Moral Hazard”. Bear Stearns and Lehman Brothers are classic 2008 real life examples of the lethality in moral hazard behaviour.

So, the longer term impact of this central bank “kitchen sink moment”? Well, think what would happen if active management ceased to be relevant because the art of buying high quality stocks and leaving the junk stocks didn’t matter, since central banks would just sweep in and buy your stocks and shares off you if markets took a dive. In short, it erodes our ability as managers to properly price value, opportunity and risk.

But back to now. What concerns us, is that markets have become overly dependent on central bank money and equity markets have, arguably, gotten over their skis in this recent rally and shot ahead of reality.

It’s either central banks who will need to withdraw support at some point, or corporate earnings being so dire in Q2 which could cause this market to give back some of the gains it’s made so far and perhaps retest the lows of March.

TAM remains focussed on what it’s always touted as the very best way to manage money through times like this – quality is quality and diversification is king. Oh, and a good helping of steady nerves.

Companies with solid earnings before this crisis, high barriers to entry, good competitive advantages, experienced management, solid ESG principals, low levels of debt and a responsible allocation of capital towards both growth and shareholders, stand the best chance of making it out of this crisis intact when many others won’t.

TAM remains underweight equities across all geographical markets in anticipation of markets pulling back from these highs over the coming months when the realisation sinks in that this V-shaped recovery will actually look more like a drawn out U-shaped recovery.

I hope our readers join me in agreeing that not charging headlong into this rally after the volatility in March remains a prudent and responsible approach to safeguarding our clients’ assets in, what we believe, to be a market driven by central bank support rather than real valuations.

As such, should this market correct we will be afforded an opportunity to snap up more high quality assets at generational low prices. But until then, it’s more “Hold the line” and less “Charge!”

Stay safe everyone, and don’t let that horse into the city walls!

Ever seen a Trojan horse made of US Dollars?
PREV ARTICLE
Skating on thin ice?
NEXT ARTICLE
Liquidity to Insolvency in a Zombie Apocalypse